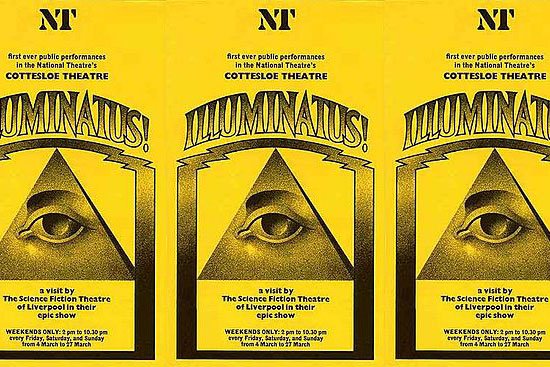 [or “Theatricality is what you can get away with”]

Last week, that most respected of British broadcasting institutions – Radio 4 – let its hair down, took a huge toke of Alamout Black and briefly turned into Radio Fnord: Robert Anton Wilson was on Book of the Week.

Well, indirectly at least.  It wasn’t a serialisation of a Wilson classic like Illuminatus!,  the Schrodinger’s Cat trilogy or the often overlooked Playboy Book of the Breast (surely a contender for the Woman’s Hour drama slot).  Rather, it was an adaptation of The Great Caper, Michael Coveney’s biography of the maverick English theatre director Ken Campbell.

In the 1970s, Campbell famously turned Wilson and Robert Shea’s vast, sprawling Illuminatus! trilogy into an equally vast and sprawling nine-hour play. Illuminatus, in case you don’t know, was “a genre busting mix of thriller, science fiction & labyrinthine international – nay, intergalactic – conspiracy.” That’s Coveney’s description, and it’s much better than mine. My description is: “Foucault’s Pendulum with dick jokes”.

I didn’t know all that much about Campbell’s Illuminatus! adaptation, but after listening to the Great Caper serialisation I found myself doing that thing middle-aged men rarely do: I wanted to be older. If I was older I could have seen this glorious folly in 1977, instead of pissing my life away on a diet of Star Wars, Spangles and The Six Million Dollar Man. And I might have gone to an Ian Dury gig afterwards.

The Great Caper was full of wonderful anecdotes and things I didn’t know (including the fact that Bill Drummond of the RAW-influenced KLF designed sets for the play) and it made me realise just how delightfully eccentric Ken Campbell was:

Charlton Heston could play (anarchist pirate) Hagbard Celine or, if not, Marlon Brando.  He telephoned Sean Connery.  He wrote to Vanessa Redgrave.  He didn’t hear back from Connery, or Heston, or Brando, but an actor called Jim Broadbent said he would ‘do’ Sean Connery.

My favourite anecdote, though, was from Bill Nighy (another former Illuminatus! cast member):

Bill Nighy had been working at the Liverpool Everyman with the director John Roche and had followed him to Aberystwyth for the summer season.  The gig turned out to be problematic and Nighy returned to London to report to Roche in Belsize Park.  The director was leaving on a family holiday, but not before giving

[Nighy] a copy of Illuminatus!  Nighy spent the first day in London reading it. He was hooked. The book was about many things, including the killing of John Dillinger outside the Biograph Cinema in Chicago in 1934, and the fact that the picture of George Washington on the American dollar bill was, in fact, a picture of a high-ranking Illuminati doppelganger.

“Now I’m not a seeker, or, indeed, a supposer of any kind,” says Nighy, “but I turned on the television after making a cup of tea and the first thing I saw was some ancient footage of John Dillinger being led backwards into a prison cell, flagged by FBI agents. I changed channels, in a nervous way, and the whole screen was filled with an American dollar bill.

“I felt slightly uneasy, and I hadn’t had a drink yet, so I figure I’ll go to the pub.  I didn’t know the area, but I walk into the Belsize Tavern and order a pint of Guinness. I’ve got these three books under my arm and a bloke with bushy eyebrows comes up to me and says:  ‘Ah, I see you’re reading Illuminatus!’

“And he says: ‘Well, I’m mounting an enthusiast’s production of it at the Liverpool School of Language, Music, Dream and Pun.’ I told him I was an actor.

The bloke with bushy eyebrows was, of course, Ken Campbell, but Nighy didn’t take him up on the offer (at least, at this point). I imagine he was thoroughly weirded-out by the evening’s cavalcade of coincidence, or maybe his parents once told him never to take parts from strangers.  Who knows?  You’d have to ask him.

In any case, things would only get weirder. Some months after the chance encounter in the London boozoir, Nighy visited some friends in Liverpool.  He missed his train home, so went to a cafe on Matthew Street to grab a cup of coffee. Standing at the cafe counter was the bloke with bushy eyebrows..

“You made it, then,” said Campbell.

I speak from personal experience, of course.

For some reason, Wilson’s books make their readers susceptible to coincidences, synchronicities and the Goddamn Bizarre. Long ago and far away I was reading the first book of the Illuminatus! trilogy in the living room of my parents’ home. My brother was watching something on TV, but this didn’t bother me as I was quite adept at screening out noise while engrossed in a book. Just as well, really.

Anyway, I was reading a passage in Illuminatus! where underground magazine editor, Joe Malik, witnesses an occult mass in LA:

They stopped to take some chalk from a table on which hashish and sandalwood incense were burning, then squatted to draw a large pentagon on the blood-red rug.  A triangle was then added to each side of the pentagon, forming a star – the special kind of star, Joe knew, which was known as a pentagram, symbol of werewolves and also of demons. He found himself remembering the corny old poem from the Lon Chaney, Jr. movies, but it suddenly didn’t sound like kitsch anymore:

Even a man who is pure of heart

And says his prayers by night

Can turn to a wolf when the wolfbane blooms

And the autumn moon is bright

Just then, there was a trailer on the TV for a forthcoming season of vintage horror movies. As I read the “corny old poem” in the book, on the TV a Vincent Price-impersonating voiceover artist recited the very same verse, word for word, at exactly the same time.

I felt slightly uneasy, too.

(Ken Campbell: The Great Caper by Michael Coveney is available in paperback and I plan to buy it. Apologies to the author for any sloppy errors in transcribing the radio adaptation.)